This is a text widget. The Text Widget allows you to add text or HTML to any sidebar your theme might have. You can use a text widget to display text, links, images, HTML, or a combination of these. Edit them in the Widget section of the Customizer. 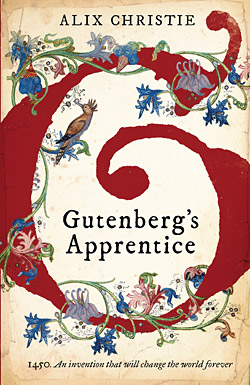 This book makes me want to google the location of the nearest Gutenberg-bible and go on a pilgrimage to see it, as the life long bibliophile that I am. I will worship that bible, marvel at it. Christie shows what a miracle the Gutenberg bible was. What an outstanding amount of work that went into it! It was the beginning of so much; not just for mass producing books, but also of who can publish books – not just the church, but laymen, politicians etc. Gutenberg’s Apprentice does detail how the first press saw the light of day, but it is also an interesting discussion of whether you can own an idea.

At the beginning of our book, Peter is an older, wealthy printer recounting, to a monk, how he, as a young man, became Gutenberg’s apprentice and became contributor and witness to the invention of the first European printing press. Peter actually started out as a scribe, and was very happy to spend his life mutinously copy manuscripts for the church by hand; there were good career prospects and the work itself brought to him, what we call in modern parlance, a meditative state. Peter perceives this peace as connection to God himself. But his foster-father has become convinced that this bearded, angry, guy in a cellar has is developing a world changing invention. This weird guy is Gutenberg, and he is working in secrecy to develop the first moveable type. Peter’s foster-father has agreed to finance the venture, but demands that his son must learn printing from Gutenberg. And so Peter joins one of the most important workshops in European history. Gutenberg’s team must manage through plague, political conflicts and dire lack of funds. Also, they must keep the project secret from competing inventors and ecclesiastical and more worldly powers interested in using their innovation for their own ends. It is strange to think that manual printing, such a basic, even outdated technology, was top-secret and a invention worth gold!!

Peter is the type of person that needs to think that his job is the most important thing in the world, if he is to be happy. And slaving in a basement all day, in front of a forge, does not match his idea of heavenly work. It seems more like Satan’s work to him. I have never read a description of a scribe’s first meeting with printed words, but as Christie describes it, it was a startling experience to these people:  How the letters are identical, how the margins are precise, appears impossible, inexplicable. No human’s hand can do this. What an outlandish thing!

You’d better be interested in the history of printing if you want to read Gutenberg’s Apprentice, because we spend A LOT of time exploring the technicalities of how printing were developed. Gutenberg did not invent the thing from bottom up. He had competitors who tried to make prints from woodcuts. What Gutenberg did was invented a new type of ink, a metal that could take the pressure required to print the ink on paper, and the movable type. Peter comes to contribute as well, he makes the books beautiful, sets a new standard for the readability and decorations of the printed book.

Not everyone are as enthusiastic as Peter about this new technology. His girlfriend Anna, for example. I would have loved to spend some more time with Anna, learned more about who she is and her outlook on the world. Because she is probably the most medieval person in the whole book. Like many women from the latter parts of ‘the dark age’, she has a trade (she is an illustrator), she is very religious and believes that the order of her society has been ordained by God. Nothing should change! To her illustrations and bookmaking are ways of serving God – it is hands on and filled with careful attention. Printing, on the other hand, only produces ‘soulless, lousy things’ in her opinion and they do not contain any of the beauty of a well-crafted manuscript. It seems ridiculous to us, children of an age with rapid digitalization and innovation, but Christie does not ridicule Anna’s position on the topic of technology and art. It is actually fascinating to read.

The story does drag towards the end, but the book is worth reading for the sake of the cast of characters.  Each of them characters are drawn to perfection. Every main character, every minor supporting character, has his or her own life, interesterst and backgrounds. Although we are caged within Peter’s point-of-view, we do get glimpses of what drives those around him. Take for example, the taciturn Hans, who, it turns out, has a tragic love-story behind him. Or Peter’s stepmother, who is constantly striving to keep her household harmonic and peaceful (a difficult task, I can tell you!) and who bravely faces the very real dangers of childbirth. In lesser hands, this book would have contained a cliched love triangle between Peter, the father and stepmother; Christie wisely steps away from that pitfalls, and instead describes complicated but still loving family relations.

Besides Peter, the star of the book is of course Gutenberg. The author does not make Gutenberg out as a genius. That is what plenty of  other authors might have done, but it would have been terribly anachronistic; the idea of the genius, familiar as it is to us, did not develop for another few centuries. So Peter does not see Gutenberg as a sort of troubled, inspired man ahead of his time. According to Christie, he is the employer from hell (‘Devil wears Prada’ does not even compare); he drives his workforce relentlessly and basically requires them to give up having a life. He could not care less about them as people, and he is obsessed with the idea of winning patronage, fame, glory and money. It annoys Gutenberg no end that he must rely on Fust for funding, and that any one else has a say in his precious project. But when Gutenberg’s desire for self-promotion and his impulsiveness begins to endanger the Bible-project, it seems that Peter must take charge and wrestle for control to save the venture from failing. Or at least that is what Peter claims he is doing.

In the end, Gutenberg’s Apprentice becomes an exploration of the concept of ownership of an idea. Who owns an invention? Who owned the finished printing press? Was it Fust who risked his family’s money and hence prospects, to finance the invention? Was it Gutenberg who had the first idea? Or was it Peter who saw the first projects through? I do not know if we are given an answer, but it is an interesting debate.

This site uses Akismet to reduce spam. Learn how your comment data is processed.